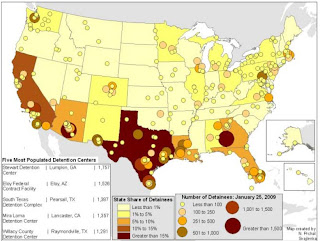 Migration Policy Institute issued a new report, "Immigrant Detention: Can ICE Meet its Legal Imperatives and Case Management Responsibilities", analyzes select data for all 32,000 detainees held in ICE custody on one night in January 2009 and examines the sufficiency of ICE's database and case tracking system. The question has taken on new urgency in light of the ICE announcement in August that it plans to revamp its detention system to reduce its reliance on local jails and private prisons, address longstanding concerns related to conditions of confinement and centralize management.

Some highlights of the report's analysis of the ICE data on detainees in the system on January 25, 2009:

* Of the 32,000 immigrants in ICE's custody, 18,690 had pending removal cases (in other words, they had not received final orders of removal).
* The average length of detention for the 18,690 pre-removal order detainees was 81 days. Seventy-four percent had been detained for less than 90 days, 13 percent for between 90 days and six months, 10 percent for between six months and one year, and 3 percent for more than one year.
* A high percentage of ICE detainees (58 percent) do not have criminal records, even though mandatory detention laws largely apply to criminal aliens; ICE includes persons who have committed immigration-related offenses in its criminal alien nomenclature, and ICE's expanding Secure Communities program places large numbers of arrested and imprisoned noncitizens into removal proceedings.
* ICE held detainees in 286 facilities, which were concentrated in southern and U.S.-Mexico border states; 68 percent of the total were held in California, Arizona, New Mexico, Texas, Arkansas, Louisiana, Alabama, Georgia and Florida.
* Nearly 70 percent of detainees were held in state and local prisons pursuant to Intergovernmental Service Agreements, 17 percent in contract detention facilities, 10 percent in service processing centers, 2 percent in federal prisons and 3 percent in Office of Refugee Resettlement facilities, medical centers, shelters, and other alternative or "soft" detention settings.

The report makes a range of recommendations, among them that ICE:

* Undertake an intensive analysis of its information systems, particularly its detention database and case tracking system, in light of its legal mandates, management imperatives and detention transformation initiative.
* Comprehensively review its contracts for detention space, with the goal of maximizing the cost savings realized by expanding alternative-to-detention programs.
* Capture information that would allow the agency to adhere to its national standards, including information on when and how the agency has complied with the standards. For standards related to detainee transfers, ICE should record information on the U.S. residence of detainees, their family members and legal counsel.
* Collect all information related to detainee medical needs, interventions, treatment and causes of death.

To read the full report, click here.
Posted by Mobilarchiva at 4:55 AM

Beyond Walls and Cages

Description and Purpose:
In the US, some 2.4 million people are imprisoned while 1.6 million migrants have been deported since 1996. On a world scale, while most people’s movement is constrained by a system of global apartheid, policing strategies are shared across national borders that are commonly used to crack down on political organizing and dissent. What are the connections between the prison industrial complex and migration policies that are symbolized by deadly cages and walls? How do these different state policies both divide and connect different groups of people across nationality, citizenship, race, class, gender, and sexuality? What work do these sturdy tools of division, isolation, and control do at this moment of economic crisis? What are the ideologies that make walls and cages seem so durable, and what cracks in these edifices can movements for social justice and liberation open up?

Making links between prison policies and migration policies is important for being able to understand and challenge white supremacy, US imperialism, capitalism, and militarization. We want to understand the ways in which the prison abolition and immigrant justice movements are opposing state violence and the creative ways in which they are working to build a world without walls and cages. How might organizing around the “right to stay” be a way of bridging communities who face economic dislocation – whether through free trade policies or gentrification – and repressive state policies alike?

How did we put this book together?
We called for papers and solicited contributions for a book that brings materials from people who are directly affected by these systems together with work from organizers, activists, advocates, artists, poets, and researchers. We edited these contributions and found a press that was interested in publishing them.

In September and October, 2009, we also took to the road to get a closer look at the ways in which immigrant detention is building on the system of mass incarceration in the South and Southwest. How are these systems shaping the livelihoods and organizing of communities who are most affected by hyper-policing? And what changes, if any, is the current economic crisis having on these systems?


About the editors:
Jenna Loyd is a writer and researcher who is based in Syracuse, NY. Matt Mitchelson is a geographer researching imprisonment and working with former prisoners. Andrew Burridge is a geographer and activist working towards freedom of movement within the U.S.-Mexico borderlands and beyond.

If you are interested in learning more about or contributing to this project, please contact us at nowallsnocages@gmail.com.